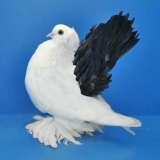 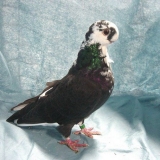 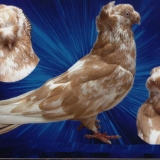 A) Congenital variations
These defects must be awarded 0 points and if necessary, according to the
national judging rules, with corresponding notes.
 Animals without visible characteristic signs of the breed
 Apparent mixed (cross) breed
 Poorly developed animals
 ( Advice: very young birds with incomplete development also may get
the note “ not judged “ ( in German o.B. )
 Birds wearing incorrect ring size for the breed.
 Clear demonstrable malformations of the skeleton
- Strong crooked of the sternum with S- or U-form (Bent Keels)
( Advice: birds with only a insignificant deformation of the
sternum should be accordingly placed back )
- Cleft sternum
- Defect toes, missing toe-nails, webbed feet
( Advice: the three last terms not to be effective for breeds with
long feathered feet – Muffed breeds)
- Malformation of the beak (crossed, twisted, over-trimmed)
 Clear demonstrable malformations of the plumage
- Cleft feather in the tail
- Retaining-spring
- Strong turned up flight feathers
- (Advice: strong turned up flights will be present, if the
secondary flights do not cover the back, but are erected
upwards.
- More then 11 or less then 9 primary flights on one or both sides
- An incorrect color within the white or colored primary flights
- Distorted tail
- Open, split or forked tail
- Split tail ( Advice: in some cases this is a sign of a breed )
- Less then 11 or more then 13 tail-feathers (Advice: more than
12 tail-feathers are allowed for breeds where the standard allows
or requires for this variation )
- ( Advice: preliminary 11 or 13 tail-feathers will be a fault in all
breeds, but not a disqualification. )
 Each other eye-color as required in the standard
- Broken eye, i.e. broken iris
- Two different eye-colors (Odd eyes)
- Each alteration of the iris
- ( Advice: little dark or pigmentation spots in the iris are
according to the breed minor or major faults )
- Poor Stance
- X- or O-Legs.
B) Divergences realized by the exhibitor
These faults are not permitted activities and have to be penalized
according to the rules of the appropriate country.
 Birds without band (Rings)
 Birds with a removable band
( Advice: a greater band may be accepted, if it cannot removed )
Birds with a widened, over-colored, cut up, or soldered band
Birds with a band older than six years ( in European shows only birds
with bands from the last six years may be admitted )
Birds which are marked
Birds which are banded twice (Double ringed)
Very badly presented or unprepared animals
Sick or with extensive vermin attacked animals
Animals with obvious injuries
Animals which are visibly over trimmed to reach a well marked line of
demarcation of feathers or coloring of the plumage ( i.e. crest, head- and
bib marking ).
(Advice: visible cutting is only allowed on the head of the Hungarian )
 Each mechanical, chemical or medical influence ( action ) on feathered
and non feathered part of the body by coloring, cutting or stickering and
also turning, breaking, sewing or implantation of feathers in order to
improve the value for the beauty contest
( Advice: Cleaning of the legs and/ or the cere with alcohol or grease is
allowed, if the plumage is not affected).
 Any other attempt to mislead the judge in order to influence the decision.
 Aviaries with incorrect number of birds according to the regulations of the
country of exhibition ( this is not a disqualification, but the value will be “
no judgment” ).
C) Disqualification
No points will be given for birds, which
 Will be without judgment
 Where unnatural signs will be found
 Are not acknowledged as breed or standard color ( Exception: AOCclass
according to national rules ).
 In the case of empty cages
The European Standard Commission for Pigeons (ESCP)
Jean Louis Frindel (F) Hans Schipper (NL) Dr. Werner Lüthgen
Chairman Secretary Chairman oft the Pigeon-branch.