Regulations for organisation of European Shows for single breeds 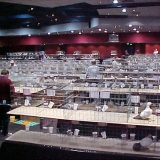 Preamble: According to § 12.11 of the constitution of the EE European shows for single breeds or reedgroups may be organised in the membercountries of the EE with agreement of the responsible section. For special breeds these exhibitions offer a better comparison for the selection of the animals within the European contest than the general European shows every three years, and they have an increasing popularity. For the organisation of these shows set rules must be observed, which are lay down according to the "Regulations for European Shows of the EE". 1. Times On European level European shows for special breeds may be organised only once a year per show-season for a breed or a breed-group. But it is impossible to organise a show for special breeds in the season in which a general European show takes place ( protection of this show ). Comparable shows may be organised only as international shows, but the protection-time according to article 2 of the "Regulations for European Shows of the EE" must be considered. 2. Application 2.1. Each membercountry can apply for realization of an European show for single breeds in the section which is responsible for the respective species of animals. This application must be submitted in good time in order to put it on the agenda for the meeting of this section. 2.2. With the application place and time of the exhibition must be given. Furthermore the names of the membercountries which will participate should be given. After closing of the exhibition a short report about the show and a catalogue should be send to the chairman of the section. 3. Breeds All breeds and colours which are acknowlegded in the Europa-standard, the Europa-list of the EE or the standards of the membercountries can be exhibited. 4. Judges In order to guarantee a correct valuation, the group of judges ( jury ) should not only exist of national judges, but also of a suitable range of judges from these countries which participate with their animals in this show. 5. Judgement The animals will be valued by international valid criterias, but with consideration of the rules of the country, in which the European show takes place. For poultry and pigeons a pointsystem must be used with a frame of 90 - 97 points. 6. Prizes The EE will give one Europe-medail for each European show, acknowleged by the section, which is responsible for the respective species of animals. For the countries, which participate in this European show it is allowed to give more prizes than it is the local custom of the exhibition"s management. 7. Awards 7.1. Under the influence of the "Regulations for European Shows of the EE" the titel Europachampion (European Championship) may be awarded for single animals, if the following requirements are fulfilled: If at least 20 entries from at least two countries are exhibited, the best exhibit will get the titel, regardless of its sex. If individual colour variations fulfil the prerequisities ( i.e. at least 20 entries from two countries ) more European Championship titles may be awarded for the other colours, if these also fulfil the requirements. If more than 40 exhibits from three countries have been entered, the best male as well as the best female will be awarded an European Championship. The same applies for further individual colour varations, as long as they fulfil the requirements. In order to obtain the title, the exhibit must have been marked at least "very good" ( = 94 points).
For the management of the show it is allowed to heighten the conditions in order to reduce the number of European championships. 7.2. The management of the show has to write out an adequate document for the winner of the title Europachampion, in which the type of exhibition, the breed ( Europa-Show for.............) and the place of the exhibition must be specified. 7.3. Possibly other awards require an agreement of the EE. 8. Rare Breeds The rules mentioned above may be reduced for rare breeds according to article 12 of the regulations for European Shows of the EE, but exhibitors from at least two countries must be present. In order to reach these conditions it is possible to combine some breeds.