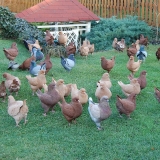 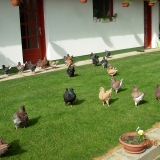 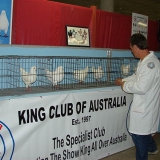 The King is a breed of pigeon developed over many years of selective breeding primarily as a utility breed. Kings along with other varieties of domesticated pigeons are all descendants from the Rock Pigeon (Columba livia). The breed is known for large size and suitability for squab production.

The breed also has a variety bred for exhibition purposes at pigeon shows. It is called the Show King to distinguish it from the purely utility variety. The Show King is dual purpose and can be used for squab raising.

The King is a dual purpose breed that originated in the United States. They were developed during the 1890s by crossing four older varieties. The Duchess for grace; The Homer for alertness; The Maltese for compactness and style: the Runt for body and size.