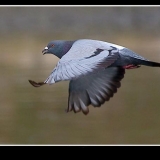 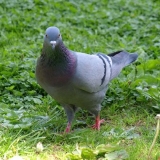 A new disease concern for pigeon fanciers is being recognized with increasing frequency. With reports of infected flocks in northern and southern California, Canada, and Australia, it now appears that Pigeon Circovirus may become a major problem among mixed-aged flocks. This is an example of a disease that has been around for at least a decade, but that went unrecognized until recently. 1.
Circoviruses are a newly described group that includes Pigeon Circovirus, Psittacine Beak and Feather Disease (PBFD) and Chicken Anemia Agent (CAA). Detailed laboratory studies confirm that these viruses are similar to one another (they share some portions of their DNA), but there is no known cross-over of disease agents from one group of birds to another. PBFD is certainly the best known of the three, affecting more than 35 species of "hookbills" (parrots, macaws, cockatoos, and their allies). This disease results in characteristic abnormalities in feather growth, beak lesions and long-term loss of body condition. It is known that both PBFD and CAA cause disruption of the tissues comprising the lymphoid system. This system (including the spleen, thymus, Bursa of Fabricius, and both gut- and bronchial-associated lymphoid tissues) houses cells that are responsible for most immune functions of the body: making antibodies, recognizing disease organisms, processing antigens, and so forth. Because CAA and PBFD viruses harm the lymphoid organs, birds having these diseases are "immunosuppressed". That is, these viruses cause a form of acquired immunodeficiency (like human AIDS). One result is that secondary infections with other viruses, bacteria and fungi are common among birds with PBFD and CAA, even when birds are vaccinated against the secondary problems. In other words, Circoviruses compromise the birds" ability to benefit from vaccination!
Disease symptoms seen in birds with Pigeon Circovirus somewhat resemble those seen with PBFD and CAA. Pigeons initially show respiratory symptoms, weight loss, diarrhea, and stop eating, often dying after a short (2 to 5 day) period of illness. Many symptoms seen in Circovirus - infected birds are really attributable to disease caused by secondary infections that take hold because Circovirus has suppressed the bird"s immune responses. Among these secondary infections, researchers have found Chlamydia (Ornithosis/Psittacosis), Herpes virus, Pasteurella (Cholera), Paramyxovirus - 1, Trichomonas (Canker), and Aspergillus (among others). Interestingly, in some Circovirus - infected flocks, there will be illness, but no mortality, while in other flocks, 100% of the squabs will die.
When these pigeons are presented for post-mortem exam, the most common findings are destruction of cells in the spleen, thymus and Bursa. The latter two organs normally shrink in size after hatching and are tiny or absent in the adult bird. In the youngster, however, they are very important as sites for immune system tissues. With these primary target organs, it is not surprising that all pigeons with confirmed Circovirus infections thus far have been one year or less in age. Infections have occurred both in racing lofts (in one case a bird returned two days late from a race and other individuals were performing poorly.), and in squab operations; a variety of breeds are represented. The relatively high frequency of infections among racing pigeons suggests that inadequate attention has been paid to shipping conditions and quarantine. Dr. Leslie Woods, of U.C. Davis feels that if Pigeon Circovirus holds true to the pattern set by PBFD and CAA, then infection may be by a fecal-oral route. As yet, there are no known wild bird reservoirs for the virus, so it is uncertain how racers are encountering the disease.
Several factors conspire at present to hinder the prevention and diagnosis of Circovirus in Pigeons. So far, researchers have not been able get the virus to replicate in the lab. This step is required before rapid diagnostic tests can be developed or vaccine trials can be done. Additionally, the presence of so many secondary infections in Circovirus - positive flocks can lead to errors in treatment and diagnosis. Unfortunately, the other Circoviruses are very resistant to treatment with heat, disinfectants and detergents. 2. If this also holds for Pigeon Circovirus, it may be that the only way to salvage an infected flock is to eliminate all young birds for at least a year (ie, let the virus die - out naturally). Even this measure may fail, however, if the virus is able to exist in a "carrier state" in some adult birds. These and other details of the epidemiology (natural history and patterns of infection) of Pigeon Circovirus are completely unknown.
Our advice is to pay careful attention to hygiene and quarantine procedures when shipping birds, especially racers. Fanciers who import squabs, particularly into flocks that already have many young birds, should observe strict quarantines for 2 to 4 weeks after arrival. Until flocks can routinely be vaccinated, this newly recognized, immunosuppressive virus represents a real threat to "open - entry" flocks and racing lofts.
Dave J. Rupiper DVM
Kenneth T. Briggs DVM, Ph.D.